skip to main | skip to sidebar

Life on the Navajo Reservation During the Depression 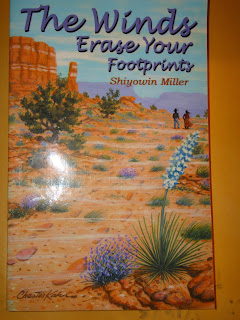 THE WINDS ERASE YOUR FOOTPRINTS


A book by Shiyowin Miller

One of the books that came out of my family was “The Winds Erase Your Footprints,” written by my wife Dolores’ mother, Shiyowin Miller.  Shiyowin, who was part Osage, was immersed in Native American culture. I remember visiting her home in Temple City, which seemed like an Indian museum with a full library, drums, pots, and artifacts from all over the country.  Shiyowin had been a music and dance teacher, and was a professional dancer. She knew Iron Eyes Cody, and worked with Luther Standing Bear, a Lakota Sioux who wrote “My People the Sioux” and other books. Luther adopted Shiyowin, and let her act as his agent for his various books and other legal matters. It brought the past alive to me when I was able to see and feel the pipes, sandals, robe, and other materials that Standing Bear had given to Shiyowin.

Shiyowin also had many friends from the Navajo lands. In the 1930’s, Shiyowin’s best friend, Juanita, fell in love with a Navajo man, Luciano, who’d been working as an extra in Hollywood.  Juanita and Luciano got married, and moved back to Luciano’s Navajo lands in New Mexico. Shiyowin kept in touch with Juanita, and wrote about the experiences that Luciano and Juanita underwent on the reservation, during the Depression when there was so little work.

To write the book, Shiyowin had interviewed her best friend to write this true story of the harsh life in the Navajo lands during the 1930s. It's a wonderfully-told story, written mostly during the 1950s and ‘60s. Shiyowin died in 1983, and when Shiyo’s daughter, Dolores (my wife) showed me the manuscript in the late 1990s, I was amazed at the quality and depth of the story, and could barely believe it had not been published. To me, it was like reading a Tony Hillerman novel, except it was true!

Everyone said that the book accurately depicted life on the Rez during that time, mixed in with some accounts of Navajo witchcraft.  With some editing, Dolores and I got the book published in 2002 by Naturegraph Press, which features many Native American titles.  If you do an internet search with the book's title, you'll see some of the reviews that have been published about this book.


The story was descriptive, compelling, and you feel as if you are re-experiencing the harsh winds, the life in the Hogan making coffee, the search for work, and all the ceremonies and gatherings that were a part of the Navajo way of life.  The books, which was 335 pages when published, also contained hints and clues in the backdrop about Navajo witchcraft, and the ma-itso, the wolf clan which was feared by most.


The freak death of Luciano was generally attributed to the work of the ma-itso, and Shiyowin gives the clues in bits and pieces, in the way that Tony Hillerman so masterfully slowly revealed his mysteries.


The following excerpts from THE WINDS ERASE YOUR FOOTPRINTS are Copyright  and may not be re-printed without permission of the publisher.


from chapter 7: The Sing


And then Shimah was telling him about the yellow pollen. Juanita could almost follow the story by her mother-in-law's excited gestures. Shimah's face was strong and tense, no room for gentleness, and her voice carried a new undertone--like fear. Only her hands seemed natural, although excited, as she gestured. Strange that Shimah should tell about the yellow pollen, rather than ask the rider about himself, about news which he was surely carrying. Of what interest could the yellow pollen be to him?


But he was interested. He leaned forward as though better to hear her words; his eyes narrowed and his face looked very grave. He asked many questions. Shimah answered and sometimes Yee-ke-nes-bah. Through their conversation one word seemed to repeat itself until it began to echo and re-echo in Juanita's mind: ma-itso . . . ma-itso.


...And then Lorencito began to talk seriously to Luciano; Juanita heard the work ma-itso repeated


again and again. Shimah sat nodding her head as her oldest son talked, occasionally adding a word to what he was saying. Luciano turned to Juanita; his face was marked with gravity as was his older


brother's. "Lorencito says that it is not safe to keep this from you any longer; I should tell you now."


Juanita waited. Her mouth and throat felt suddenly dry. She could not have spoken. Her thoughts


raced: this is in some way connected, ma-itso and yellow pollen. Perhaps it's all connected, all of the puzzling and unexplained things that have happened. And somehow, the looks on their faces, Shimah's and Lu's, Yee-ke-nes-bah's and Lorencito's, are a little bit frightening.


"Before we came here," her husband began, "when I tried to tell you about everything which might seem strange to you, I didn't tell you about ma-itso--the wolf clan. One reason, it no longer seemed as believable to me as it once had; perhaps all the years in school did that; anyhow, in Hollywood I seldom thought of it. When we came here, my mother told me the wolf clan was still strong in Cañoncito. I didn't tell you then because I could see no reason why they would try to harm us. But to be sure you were safe, my mother and sisters watched you every minute.


"There were times when I almost told you, those times when you were upset about things you didn't understand. And yet I hated to frighten you needlessly. Already there was so much for you to worry about. It seemed better to wait until I had a job, until we were living in town and then tell you. "But now two things have happened which make me sure the ma-itso is for some reason after us. I found yellow pollen in an X mark on my hat brim, and today my mother found pollen on our clothes. That is their warning. Lorencito thinks you will be safer if you know about this evil thing."    A hundred questions sprang to Juanita's lips, but her husband went on talking, interrupted now and then by Lorencito or his mother.


"The wolf clan is as old as the Navajo tribe. From the beginning some men turned certain powers, which should have been used for good, toward evil things. Corn pollen, used for blessing, is used by the ma-itso as a warning to a person marked for death. And death does not come in a usual manner; it comes in a round-about way which cannot be easily traced. The victim sickens suddenly; sometimes his mind leaves him. No Medicine Man can cure him. Sometimes the victim meets with a mysterious and fatal accident.


Juanita had hung up two diapers when she became suddenly aware of something across the arroyo. When she looked carefully nothing seemed unusual; in the dim light she could see the sharp banks of the arroyo, the clumps of juniper in dark patches on the other side. Then gradually, two of the dark juniper patches began to take on the indistinct forms of dogs sitting on their haunches.


That was what imagination would do for you. She even thought now that she could see the large


pointed ears. Juanita smiled to herself. This must be what Lu had seen, the queer-shaped juniper


bushes. They looked surprisingly like coyotes, only larger. The likeness had even startled her for a


moment and her mind had certainly not been on wolves or wolf tracks. She pulled her eyes away and began resolutely to hang up more diapers.


A sudden movement, one dark figure detaching itself from the other and moving farther down the arroyo, a third form appearing almost directly across from her on the opposite bank. Juanita stood absolutely still. There was no sound except the flapping of the clothes on the line.


When Juanita reached the kitchen door, she called to her husband to bring the shotgun. "Those


figures that you saw are out there again." This couldn't be her voice, tight and choked.


Two of the dark forms were loping off down the arroyo when Luciano reached the bank, but the


third sat directly across from him like a very large coyote on its haunches. Luciano raised his gun and fired directly at it. The animal seemed to gather itself into a ball and plunge down the bank of the arroyo--across the wide, sandy bed.


from chapter 20: The Wolf Hunt


"What do you know about this wolf hunt?" Juanita finally asked.


"Something has been stealing lambs this spring; the dogs bark but when the men get out to the sheep corral there's nothing around." Alice paused to consult Pah-des-bah.


Now that she thought of it, Ginger and Bob had been restless for a few nights. The dogs had


awakened them once, howling, and Luciano had gone outside to look around.


"There's nothing out there," he had said upon returning. "Bob must have started baying at the moon and now Ginger's doing it."


heard something around his corral last night and took his rifle with him when he left the hoghan. He saw what he thought at first was a shadow. When it moved he fired at it. It got away. He couldn't trail it last night so he started out early this morning. The tracks were wolf tracks. When he met Pah-des-bah's husband, they talked about it and decided to get some of the other men to go with them."


Juanita cut the stew meat into small pieces and dropped them into the boiling water of the stew kettle. Coyotes ran near Cañoncito. Early mornings she had heard the weird yelping cries of coyotes from the direction of Apache Wash. They could have been stealing lambs. ...


Alice listened for a moment. "They've been following the wolf tracks, and the trail doubled back


several times but always went ahead again. Then they lost it on a ledge of rock on one of the mesas." She pointed north with her lips. "One of the men found a spot of blood below the ledge."


Alice paused to listen again, and then the women began to talk in low voices and move away from the doorway as the men separated and went back to their horses.


"The men said the nearest hoghan was Wounded Head's on that same mesa. They rode up there to ask him if he had seen anything or anyone that morning."


Juanita started back to the washing machine, a frown puckering her forehead.


"Wounded Head's wife met them at the door of the hoghan; her son stood beside her. The men could not see past them. She would not let them in. She said her husband was very sick. A horse had kicked him."


Excitement spread through the whole community. Some of the men began to carry guns--rifles across their saddles or old revolvers in their belts. The women who gathered in the day school kitchen or sat outside around the back door talked together in low voices. But no one rode again to Wounded Head's place on the mesa.


A fascinating glimpse of Navajo life during the depression through the eyes of one woman. The Winds Erase Your Footprints is available from the store at www.SchoolofSelf-Reliance.com, or from Amazon.
Posted by christopher at 10:58 AM